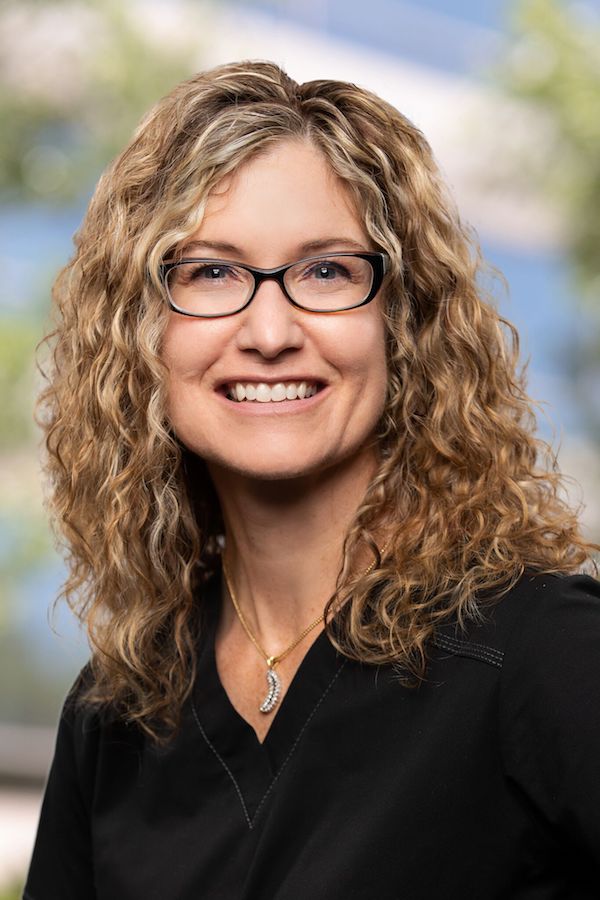 Dr. Heidi Harms grew up in cold, snowy, and windy Great Falls, Montana. When she began her college search, she wanted to move far, far away from the harsh winters. Baylor University in Waco, Texas, fit that criteria, and she completed her undergraduate biology degree in 1992. Following graduation, she worked in a biomedical research facility in Albuquerque, where they focused on respiratory research, examining the effects of various chemical exposures on risk of lung cancer development.

My specialty allows me to follow my patients through all stages of life, beginning with adolescence, transitioning into pregnancy and building their family, then through mid-life and ultimately through menopause.

From the wee age of 6 years old, Dr. Heidi Harms was inspired by her grandfather. “I aspired to follow my grandfather’s footsteps. His specialty at the time was EENT (eyes, ears, nose and throat, which eventually became the two specialties of Ophthalmology and ENT). As a child, I didn’t necessarily feel I was going to pursue the same specialty as my grandfather, but rather strove to achieve his degree of knowledge and display the same compassion and caring that he did,” she shared.

Following her years in research, Dr. Harms pursued her 6-year-old self’s dream and attended the University of New Mexico School of Medicine, where she earned her medical degree in 2001. She returned to Texas for her residency at University of Texas Southwestern Medical Center, where she served as a Chief Resident in her final year. Board certified in Obstetrics and Gynecology, she joined Advanced Women’s Healthcare in 2005.

Dr. Harms is interested in all areas of care in Obstetrics and Gynecology, including minimally invasive gynecologic, pelvic and robotic surgery as well as hormone replacement, high and low risk obstetrics, contraception management and preventive care medicine. She is certified in da Vinci robotic surgery and is currently pursuing certification in Age Management Medicine. Dr. Harms explained, “I’ve been drawn toward Age Management Medicine because it is a proactive and preventative approach to healthcare that focuses on modulating the natural process of aging BEFORE the onset of disease.”

She feels blessed that “my specialty allows me to follow my patients through all stages of life, beginning with adolescence, transitioning into pregnancy and building their family, then through mid-life and ultimately through menopause.” Like all of the physicians at AWH, she has several families where three generations are under her care.

In her free time, Dr. Harms is learning to cook delicious meals for her husband, daughter and two sons. She began subscribing to a meal delivery prep service and didn’t even own a kitchen knife to prepare the first box of ingredients that arrived on her doorstep. She’s come a long way! Even though she doesn’t like the taste of all vegetables, she’s a vegetarian and enjoys exploring new ways to enjoy vegetables and grains.

Dr. Harms and her husband stay busy cheering on their children at their baseball, softball and basketball games. Her well-nourished family is also active at Irving Bible Church. Their two, mixed breed, geriatric rescue cats, Simone and Noelle, are a part of the family. And because of them, Dr. Harms has realized she is a “Cat Whisperer,” possibly worthy of her own show on Animal Planet. And perhaps a show on Food Network isn’t far behind.